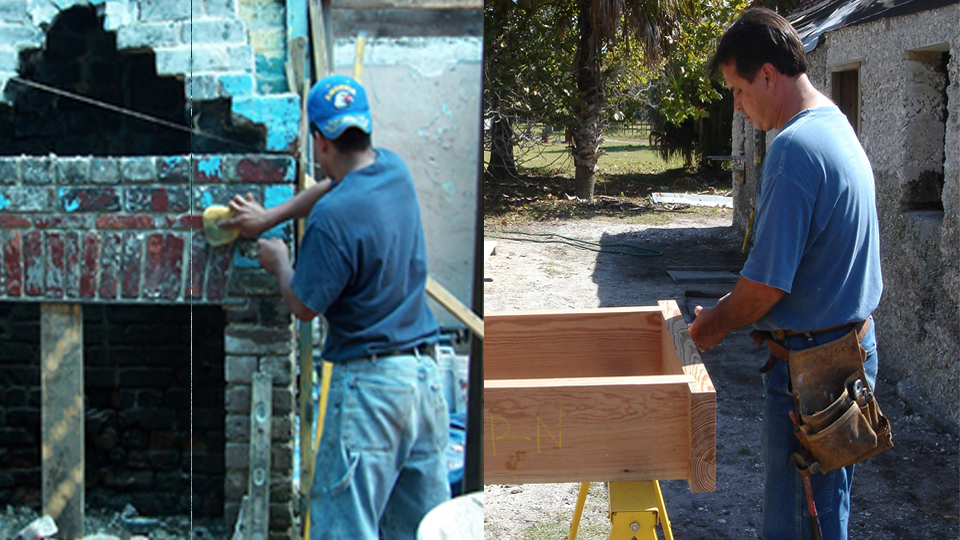 Despite Ossabaw Island’s reputation as an undeveloped, unspoiled place, the built environment of this coastal Georgia barrier island reflects a wide array of native building materials and methods, fine and vernacular architecture, and quality craftsmanship dating from the 1820’s through the mid-twentieth century.

The dozen or so existing structures on Ossabaw Island are a small representation of the hundreds of structures that were once scattered across the island in settlements that trace back to native American villages and then were divided into separate plots, or plantations.

Since 1998, TOIF has restored or stabilized ten historic buildings on Ossabaw Island. Project funds ($4.5 million) were raised from private and public foundations, federal grants and individual donations. Buildings are used to further our mission: as housing, teaching, and laboratory spaces; for photography/darkroom processing; and for historic interpretation of 19th and 20th century life on Ossabaw Island and the Georgia coast.

Ossabaw Island Saddlebag Tabby Cabins are estimated to have been built in 1820-1840 by slaves who worked on the North End Plantation. Three of the possibly nine buildings remain from the original complex. The cabins were built by hand, by mixing lime from burned oyster shells, oyster shells, sand and water to create tabby, a cement material. The cabins are 400 square foot, single story duplexes with two one-room living spaces separated by a central chimney. This twin, one room, side-by-side design is called a saddlebag house, a vernacular style popular throughout the Southeast in the early to mid 1800s.

Enslaved people who were skilled carpenters and tradesmen built these houses and those of the plantation owners. Tabby, tabby bricks, clay bricks, shell mortar, and wood were building materials used in building the tabby houses. Bricks were handmade, possibly on Ossabaw or imported from surrounding brick companies.

In 2005, two of the three tabbies were restored to reflect their original appearance and use.  The restoration was funded through a $400,000 Save America’s Treasures grant from the U.S. Department of the Interior, matched with private donations.  Read Archaeological Investigations at Tabbies 1 and 2, North End Plantation, Ossabaw Island, Georgia LAMAR Institute Publication Series, Report Number 108 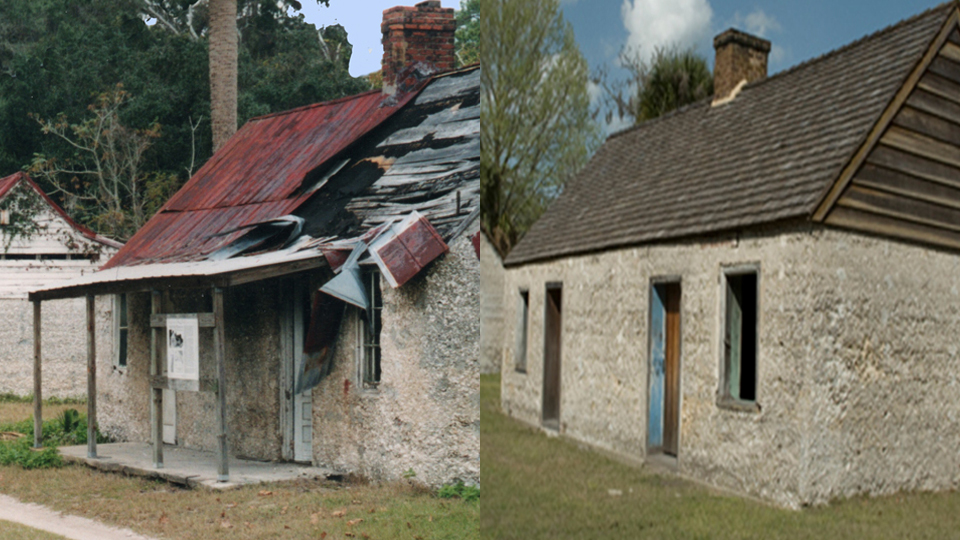 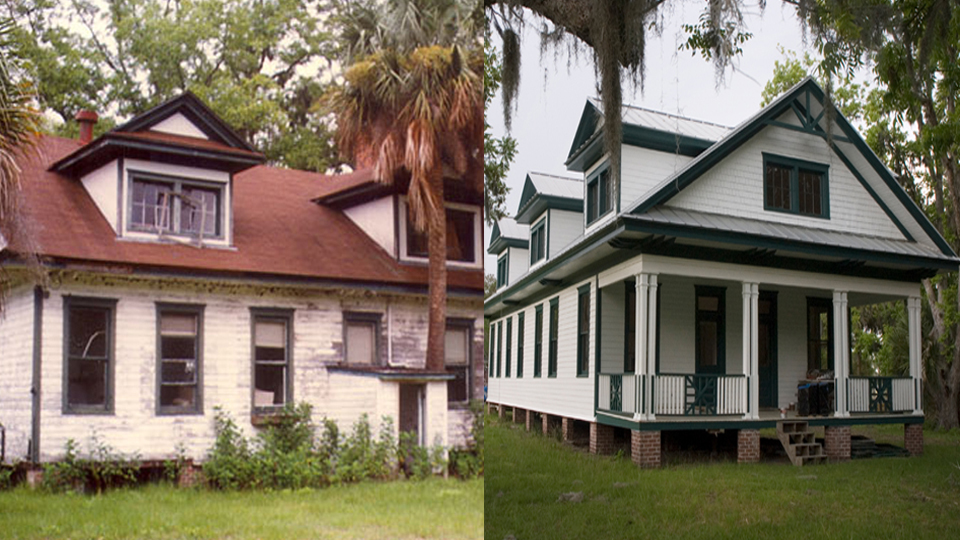 The Boarding House was constructed in 1918 to house the island superintendent, his family, and the island “kennel man” who cared for hunting dogs that lived on the island.

The 3,500 square foot structure was originally a duplex residence; when its restoration is completed it will consist of two living spaces, one on the ground floor and one on the second floor.

The Boarding House was constructed when Ossabaw Island was owned by some of the partners of Savannah’s Strachan Shipping Company: George P. Walker, George Ferguson Armstrong, Frank Duncan Macpherson Strachan, Harry Garden Strachan and Robert Walker Groves. Under their ownership from 1916 to 1924, they acquired the island for use as a hunting retreat.

When the Torreys bought Ossabaw Island they used the Boarding House as living space for the workers who built the Main House (1924-1926).  After completion of the Main House, the Boarding House was used to house island staff until the 1980s. In 2007 the Ossabaw Island Foundation undertook a $495,000 restoration of the duplex, completed in the fall of 2009, for long term housing for visitors and island staff.

The Club House is located at the end of the ally of oak trees on the North End.  The two story prefabricated wood frame structure is approximately 4,000 square feet.  It features a metal roof and wrap around porch; a kitchen, great room, second upstairs kitchen, bathroom and bedroom on the ground floor; and three sleeping rooms and two baths on the second floor.  The Club House is believed to have been assembled in the late 1880’s or early 1890’s, on the former site of two Morel family plantation houses, each of which burned.  John M. Waterbury of New York City purchased Ossabaw Island from the Morel family in 1886. It is believed that Waterbury constructed this pre-fabricated home on site to use as a hunting lodge. His initials J.M.W. are stamped on most of the wooden framing pieces. 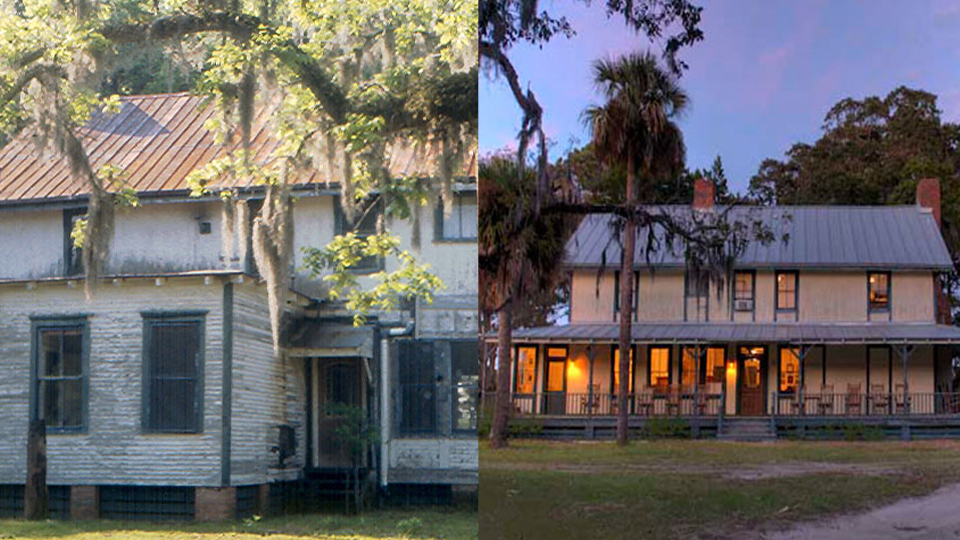 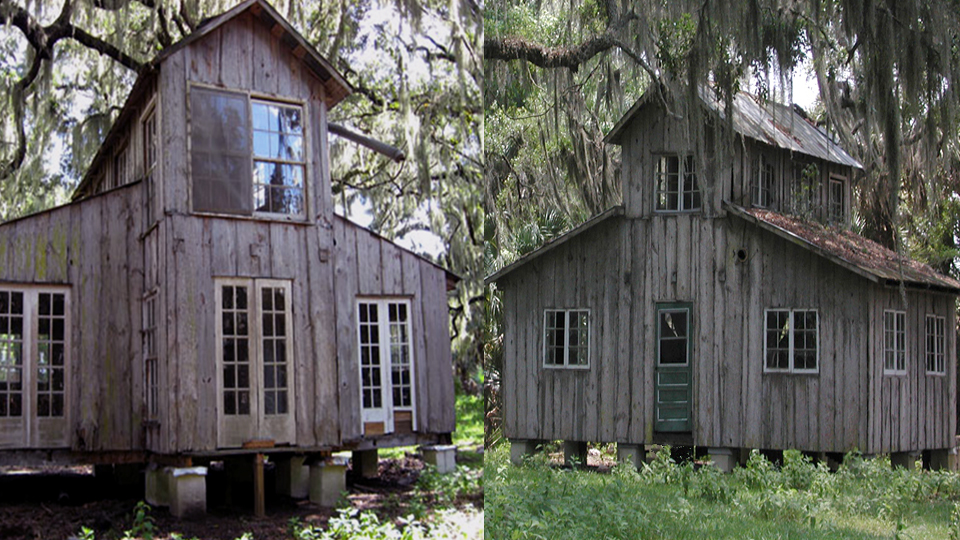 Existing structures at Middle Place Plantation include old lumber camp cabins and barns dating from the 1930’s, last used by The Genesis Project in the 1970’s and 80’s to provide housing and studio space.  Also at Middle Place is the Tower House, a post-and-beam one story lofted structure with glass windows, and a solar powered sauna and shower, all constructed using downed trees from 1979’s Hurricane David and a portable chainsaw mill, and built by Genesis Project members.

Dr. and Mrs. Torrey constructed the large Spanish Colonial Revival-style house on the north end of the island which was completed in 1926. The home was designed by noted Savannah based architect Henrik Wallin. Mr. Wallin designed several buildings on the National Register of Historic Places within Savannah’s historic districts, including Armstrong House, Charles Ellis School, 37th Street School, and the Y.M.C.A.

The Ossabaw Island Foundation restored the terra-cotta roof of the Torrey West Main House in 2014. The restoration received a regional historic preservation award. 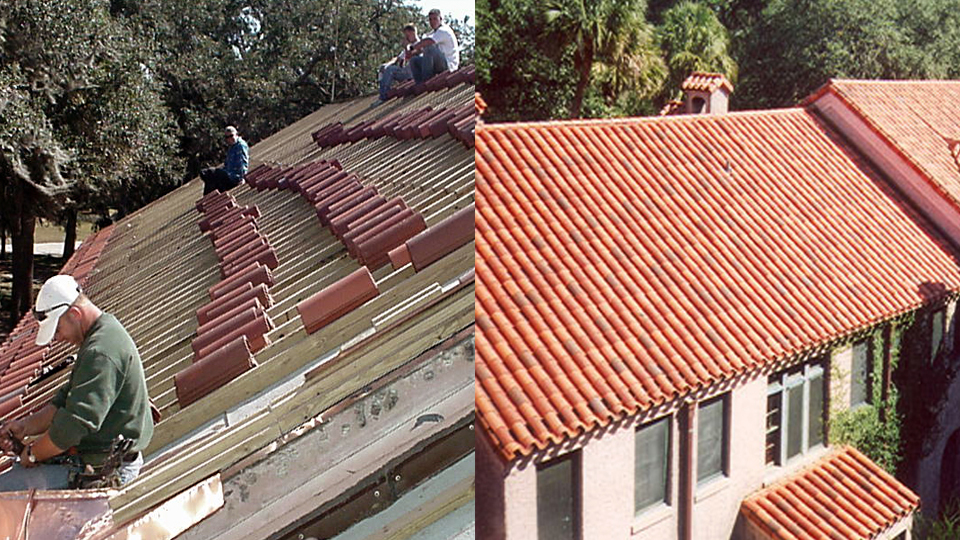 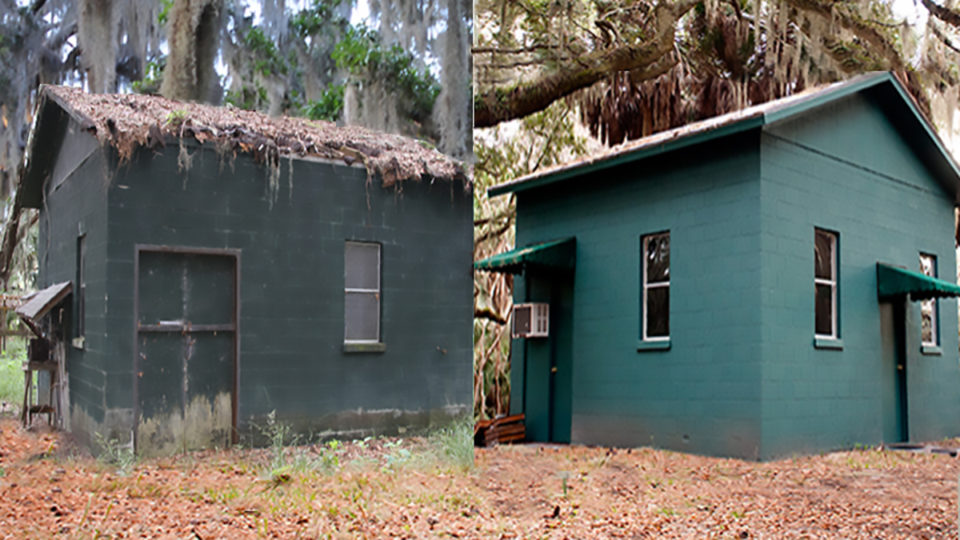 In January 2014, The Ossabaw Island Foundation opened a “new” Field Laboratory on the North End of Ossabaw Island. The 500-square foot structure is an adaptive reuse of a mid-20th-century-era building, originally build for meat processing.

The Field Lab includes a work area for up to 16 students for processing ecological and biological specimens, plus a full darkroom for processing film photography. The $125,000 renovation began in 2012 and was completed in December 2013.

I am raw html block.
Click edit button to change this html